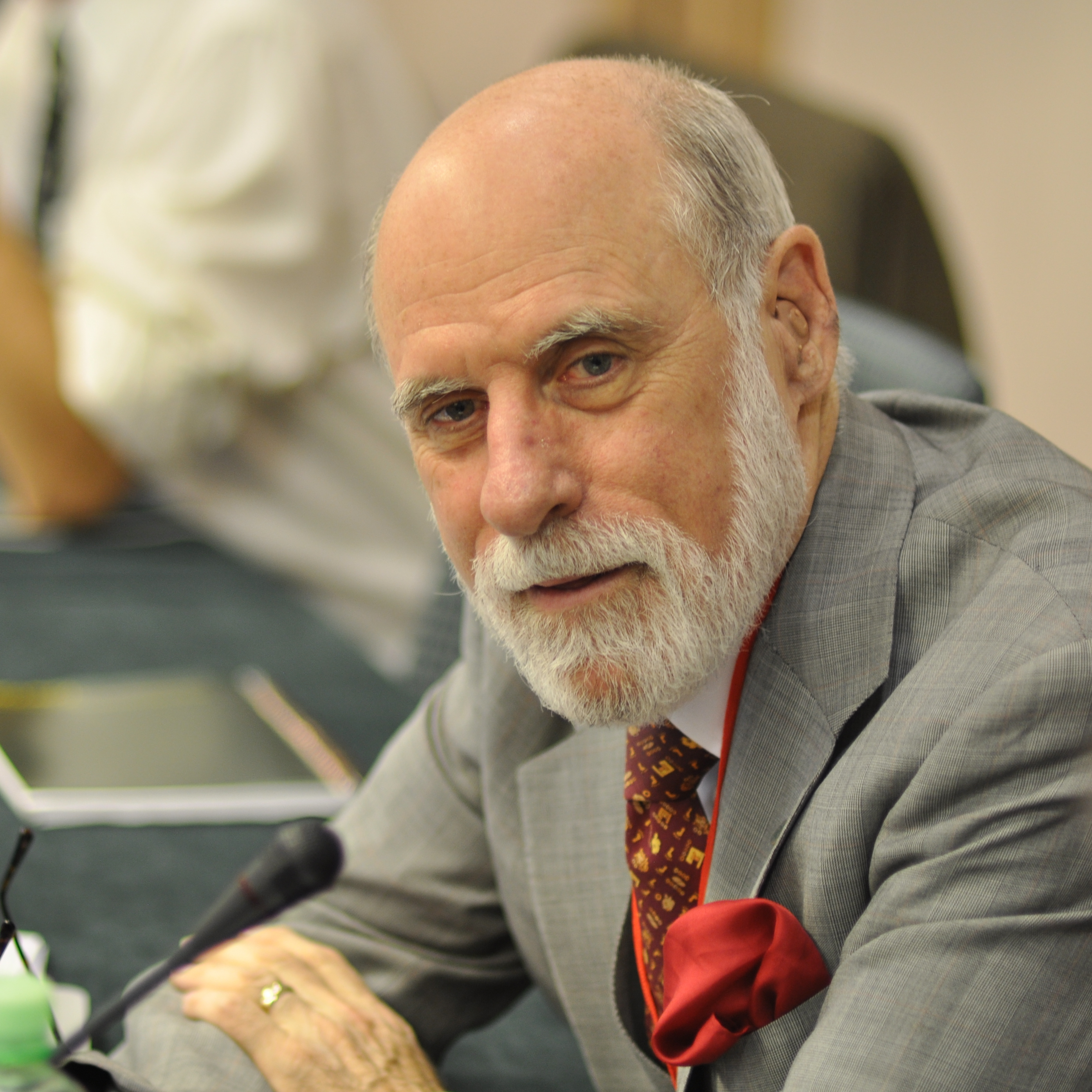 2/9, 12pm: Vinton Cerf, “Safety, Security and Privacy in the Internet”

RSVP for this event here:

In this talk, “Safety, Security and Privacy in the Internet,” Vinton G. Cerf, Chief Internet Evangelist for Google and one of the founders of the Internet, will outline many of these issues and challenges, to stimulate discussion and to surface ideas that may lead to the desired outcome: a safe, secure network that protects privacy and the interests of its users. This presentation is co-sponsored by the UC Berkeley Center for Long-Term Cybersecurity and the Berkeley Center for Law, Business and the Economy.

Vint Cerf has served as vice president and chief Internet evangelist for Google since October 2005. In this role, he contributes to global policy development and continued standardization and spread of the Internet. He is also an active public face for Google in the Internet world.

Cerf is the former senior vice president of Technology Strategy for MCI. In this role, Cerf was responsible for helping to guide corporate strategy development from the technical perspective. Previously, Cerf served as MCI’s senior vice president of Architecture and Technology, leading a team of architects and engineers to design advanced networking frameworks including Internet-based solutions for delivering a combination of data, information, voice and video services for business and consumer use.

Widely known as one of the “Fathers of the Internet,” Cerf is the co-designer of the TCP/IP protocols and the architecture of the Internet.  In December 1997, President Clinton presented the U.S. National Medal of Technology to Cerf and his colleague, Robert E. Kahn, for founding and developing the Internet. Kahn and Cerf were named the recipients of the ACM Alan M. Turing award in 2004 for their work on the Internet protocols. The Turing award is sometimes called the “Nobel Prize of Computer Science.” In November 2005, President George Bush awarded Cerf and Kahn the Presidential Medal of Freedom for their work. The medal is the highest civilian award given by the United States to its citizens. In April 2008, Cerf and Kahn received the prestigious Japan Prize and in 2013 Cerf, Kahn and three others received the Queen Elizabeth Prize in Engineering. Cerf was made an officer of the French Legion d’Honneur in December 2014.

Prior to rejoining MCI in 1994, Cerf was vice president of the Corporation for National Research Initiatives (CNRI) where he worked on information infrastructure and digital libraries. As vice president of MCI Digital Information Services from 1982-1986, he led the engineering of MCI Mail, the first commercial email service to be connected to the Internet.

During his tenure from 1976-1982 with the U.S. Department of Defense’s Advanced Research Projects Agency (DARPA), Cerf played a key role leading the development of Internet and Internet-related packet data transport and security technologies.

Cerf was appointed by President Obama to serve on the National Science Board beginning in February 2013. He served as president of the Association for Computing Machinery (ACM) from 2012-2014. He served as chairman of the board of the Internet Corporation for Assigned Names and Numbers (ICANN) from 2000-2007. Cerf also served as founding president of the Internet Society from 1992-1995 and in 1999 served a term as chairman of the Board.   In addition, Cerf is honorary chairman of the IPv6 Forum, dedicated to raising awareness and speeding introduction of the new Internet protocol. Cerf served as a member of the U.S. Presidential Information Technology Advisory Committee (PITAC) from 1997 to 2001 and has served on several national, state and industry committees focused on cyber-security. Cerf sits on the Board of Directors for the Americas Registry for Internet Numbers (ARIN) as Chairman, StopBadWare (Chairman), the Marconi Society (Vice Chairman) and the Science Advisory Board for CosmosID. Cerf also sits on the Board of Associates of Gallaudet University. He serves on the Jet Propulsion Laboratory Advisory Committee and is a distinguished visiting scientist there. He served as Chair of the Visiting Committee on Advanced Technology of the U.S. National Institute of Standards and Technology during 2006-2013. He also serves as Treasurer of the National Science & Technology Medals Foundation. Cerf is a Fellow of the IEEE, ACM, and American Association for the Advancement of Science, the American Academy of Arts and Sciences, the International Engineering Consortium, the Computer History Museum, the Annenberg Center for Communications at USC, the Swedish Royal Academy of Engineering, the American Philosophical Society, the Hasso Platner Institute and is a member of the US National Academy of Engineering. In 2011, he was made Distinguished Fellow of the British Computer Society.

Cerf is a recipient of numerous additional awards and commendations in connection with his work on the Internet. These include the Marconi Fellowship, Charles Stark Draper award of the National Academy of Engineering, the Prince of Asturias award for science and technology, the National Medal of Science from Tunisia, the St. Cyril and St. Methodius Order (Grand Cross) of Bulgaria, the Terra Mariana Medal of Estonia, the Alexander Graham Bell Award presented by the Alexander Graham Bell Association for the Deaf, the NEC Computer and Communications Prize, the Silver Medal of the International Telecommunications Union, the IEEE Alexander Graham Bell Medal, the IEEE Koji Kobayashi Award, the ACM Software and Systems Award, the ACM SIGCOMM Award, the Computer and Communications Industries Association Industry Legend Award, the Yuri Rubinsky Web Award, the Kilby Award , the Rotary Club International Paul P. Harris Medal, the Joseph Priestley Award from Dickinson College, the Yankee Group/Interop/Network World Lifetime Achievement Award, the George R. Stibitz Award, the Werner Wolter Award, the Andrew Saks Engineering Award, the IEEE Third Millennium Medal, the Computerworld/Smithsonian Leadership Award, the J.D. Edwards Leadership Award for Collaboration, World Institute on Disability Annual award and the Library of Congress Bicentennial Living Legend medal. Cerf was inducted into the National Inventors Hall of Fame in May 2006. He was made an Eminent Member of the IEEE Eta Kappa Nu (HKN) honor society in 2009. In 2010 he received a Lifetime Webby Award. In February 2011 he was named a Stanford Engineering School “Hero” for his work on the Internet and received a lifetime achievement award from the Oxford Internet Institute.

In December 1994, People magazine identified Cerf as one of that year’s “25 Most Intriguing People.”

In addition to his work on behalf of Google and the Internet, Cerf has served as a technical advisor to production for “Gene Roddenberry’s Earth: The Final Conflict” and made a special guest appearance on the program in May 1998. Cerf has appeared on television programs such as NextWave with Leonard Nimoy and often co-hosted World Business Review, with Alexander Haig and Caspar Weinberger. In July 2014, he appeared on the Colbert Report television show. Cerf also holds an appointment as distinguished visiting scientist at the Jet Propulsion Laboratory, where he is working on the design and implementation of an interplanetary Internet.

His personal interests include fine wine, gourmet cooking, and science fiction. Cerf and his wife, Sigrid, were married in 1966 and have two sons, David and Bennett.