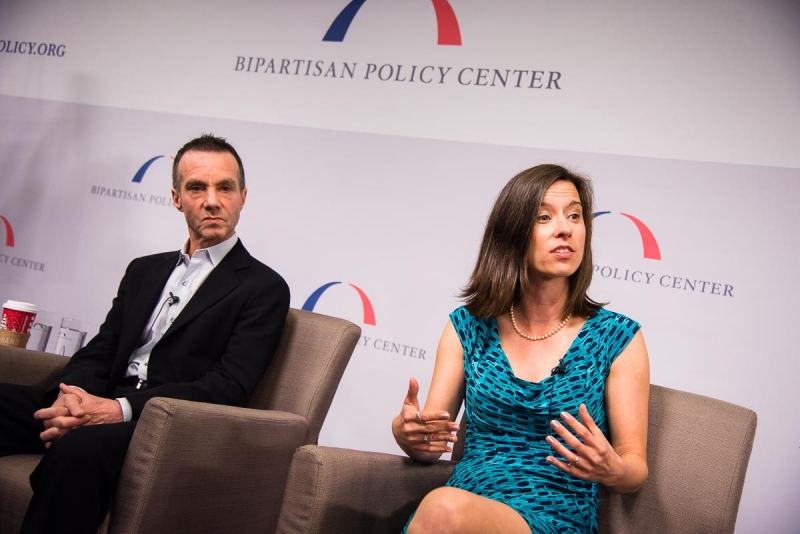 On November 18, Steve Weber, Faculty Director of the Center for Long-Term Cybersecurity (CLTC), and Betsy Cooper, Exective Director, participated in a panel discussion hosted by the Bipartisan Policy Center, in Washington, D.C.

At the center of their discussion: “Cybersecurity Policy Ideas for a New Presidency,” a report recently published by the CLTC that is intended to help the Trump Administration prepare to tackle the complex challenge of cybersecurity. The report outlines recommendations for a cybersecurity agenda for the first 10, 100, and 1000 days of the next administration.

Weber and Cooper were joined on the panel by Rep. Will Hurd (R-TX); and Jamie Gorelick, Former Deputy Attorney General and Partner for WilmerHale. The event was moderated by Erin Kelly, Congressional Reporter for USA Today.

During the panel, Weber and Cooper explained the recommendations laid out in the report, including the call for the president to establish “a new declarative deterrence,” a set of new international norms for how nations should respond to cyberattacks launched from other countries. “We think that, at this moment, with the turnover in the administration, there’s an opportunity to reset the playing field,” Weber said. “Norms are typically brought into being by people doing things and not doing things—actions and restraint of action—at particularly salient moments in time. We believe the United States ought to be a little more courageous and bold about setting those norms, rather than waiting for others to do it for us.”

The panel also touched on the report’s recommendation to develop a public awareness campaign focused on improving public behavior around security. “People should be aware of protocols like strong passwords and two-factor authentication from a very early age,” Cooper said. “We want to encourage government and the private sector to work together to come up with new and interesting ways for these issues to be brought to bear, and for a public awareness campaign to take hold on these issues.”

Weber and Cooper explained their recommendation to launch new a government agency specifically focused on cybersecurity, as well as their concept for a new “cyber incubator” that will help build bridges between private-sector companies (particularly on the west coast) with the federal government, with a goal to encourage “idea circulation” and sharing of ideas and practices. “We want that circulation to be fast, we want it to be robust, and we want it to be apolitical,” Weber said. “One way to do that is to set up an incubator-style environment in our part of the world and get some new folks out to us.”

The panel event was covered by USA Today, Cyber Scoop, Dark Reading, CybersecurityCaucus.com, The Daily Californian, ExecutiveGov, GCN, InsideCybersecurity, and Politico, among other outlets. You can view the complete video of the panel on the Bipartisan Policy Center’s website.