On March 8, the Center for Long-Term Cybersecurity was honored to kick off our Spring 2018 Seminar Series with a presentation featuring Catherine Crump, Assistant Clinical Professor of Law at Berkeley Law, and Andrew Guthrie Ferguson, Professor of Law at UDC David A. Clarke School of Law. The seminar, which included brief presentations by the two scholars and a “fireside chat” conversation, touched on issues related to surveillance, policing, and civil liberties. 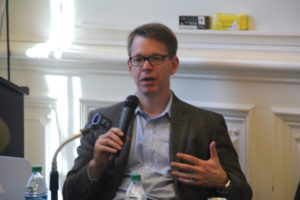 In his talk, Ferguson provided an overview of his book, The Rise of Big Data Policing, which explores how technology is changing the role of police, and what it means for citizens that law enforcement agencies are using “big data” and other technologies in their efforts to identify criminals.

Ferguson explained how digital technologies have been eagerly adopted by police departments hoping to distance themselves from claims of racial bias and unconstitutional practices, but that in reality, difficult questions remain about racial discrimination and the potential to distort constitutional protections. For example, he described how police in Chicago are developing “heat scores” to identify individuals who are considered likely to be a perpetrator (or victim) of a crime.

“It is both a measure of social control—we’re watching you—but it is also kind of a quasi public health measure, this idea that we are recognizing that there are certain risk factors for violence, and maybe we can intervene,” Ferguson said. “Critics say it’s a virtual most wanted list, but supporters say it reduces crime.”

Ferguson outlined how police are using place-based predictive modeling, social network analysis, focused visual surveillance, mass surveillance technology, and other tools, all of which represent potential threats to civil liberties. “I wrote this book to talk about this…fragmented story… and to tell a national warning, to say that we really need to start thinking about these issues, to pay attention to how policing is changing, how surveillance is changing how we work.” 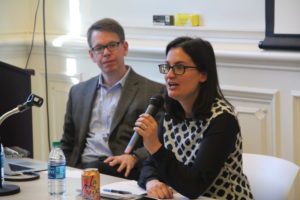 In her presentation, “Surveillance Policy Making By Procurement,” Catherine Crump, who serves as Director of the Samuelson Law Technology and Public Policy Clinic and Co-Director of the Berkeley Center for Law & Technology, discussed how federal funding for surveillance equipment disrupts local accountability mechanisms that typically regulate policing.

Crump said that she began researching this topic while working as a staff attorney for the American Civil Liberties Union, when she was surprised to learn that local city councils often had no idea that the law enforcement agencies they oversee had acquired surveillance tools. The talk detailed the structural and institutional features that lead local law enforcement agencies to adopt surveillance technology that is out of step with community norms, and reviewed ways in which some local communities have passed laws in an attempt to address this issue systematically.

The video of the seminar—including the “fireside chat” and Q&A—can be viewed below or on the CLTC YouTube channel. To learn more about the CLTC Spring 2018 Lunch Seminar Series, visit this page.