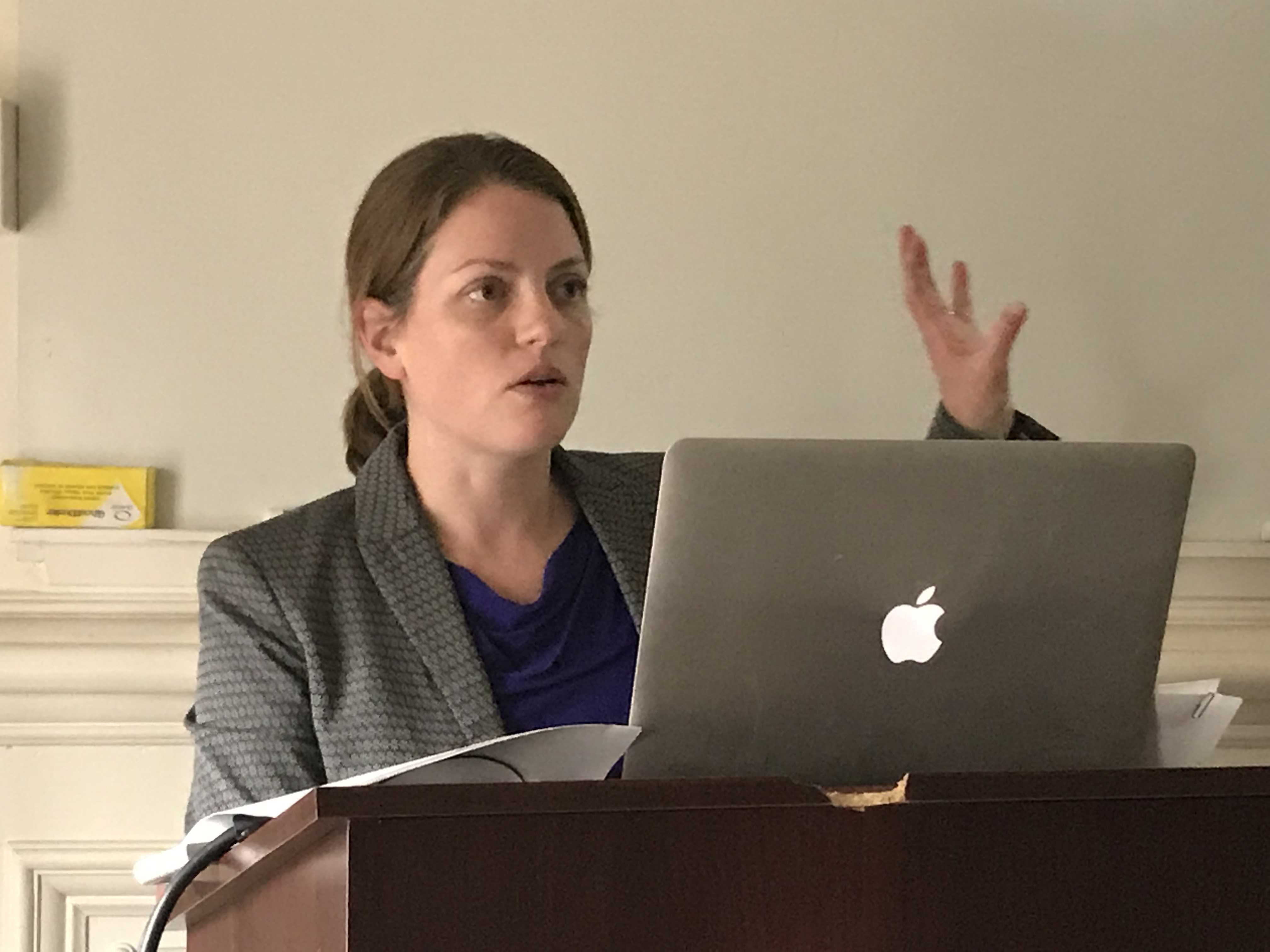 In recent years, tech giants like Apple, Facebook, Google, and Microsoft have gained power on par with that of many governments. Should global tech companies be allegiant to the interests of the nations where they operate, or should they remain neutral? If there is value in the companies acting as ‘Digital Switzerlands,’ how can this role be entrenched?

These were among the intriguing questions raised at a recent CLTC lunch seminar presented by Kristen Eichensehr, Assistant Professor at UCLA School of Law. Eichensehr writes and teaches about cybersecurity, foreign relations, separation of powers, and national security law, previously clerked for Justices Sandra Day O’Connor and Sonia Sotomayor of the Supreme Court of the United States and for Chief Judge Merrick B. Garland of the U.S. Court of Appeals for the D.C. Circuit.

Eichensehr’s talk, “Digital Switzerlands,” stemmed from a paper she published earlier this year that explored the evolving role of increasingly powerful U.S. technology companies. “[Companies] power brings with it the capacity to bolster or undermine governmental authority, and also increasing public demands for the companies to protect users from governments,” Eichensehr explained in her abstract for the talk. “The companies’ power raises serious questions about how to understand their role, including suggestions that they are public utilities, information fiduciaries, surveillance intermediaries, or speech governors…. Understanding the relationship between companies, users, and governments as triangular, not purely hierarchical, reveals how alliances among them affect the companies’ behavior toward governments. But the companies’ efforts to maintain a posture of neutrality also carry a risk of passivity that may allow governmental attacks on users to go unchallenged.”

The title of Eichensehr’s talk came from a quote from Microsoft’s Brad Smith, who presented the concept at a speech at the RSA Conference in March 2017. Smith called for a “digital Geneva Convention” to protect cyberspace and said that “we as a global tech sector need to be trusted and neutral as a digital Switzerland.” 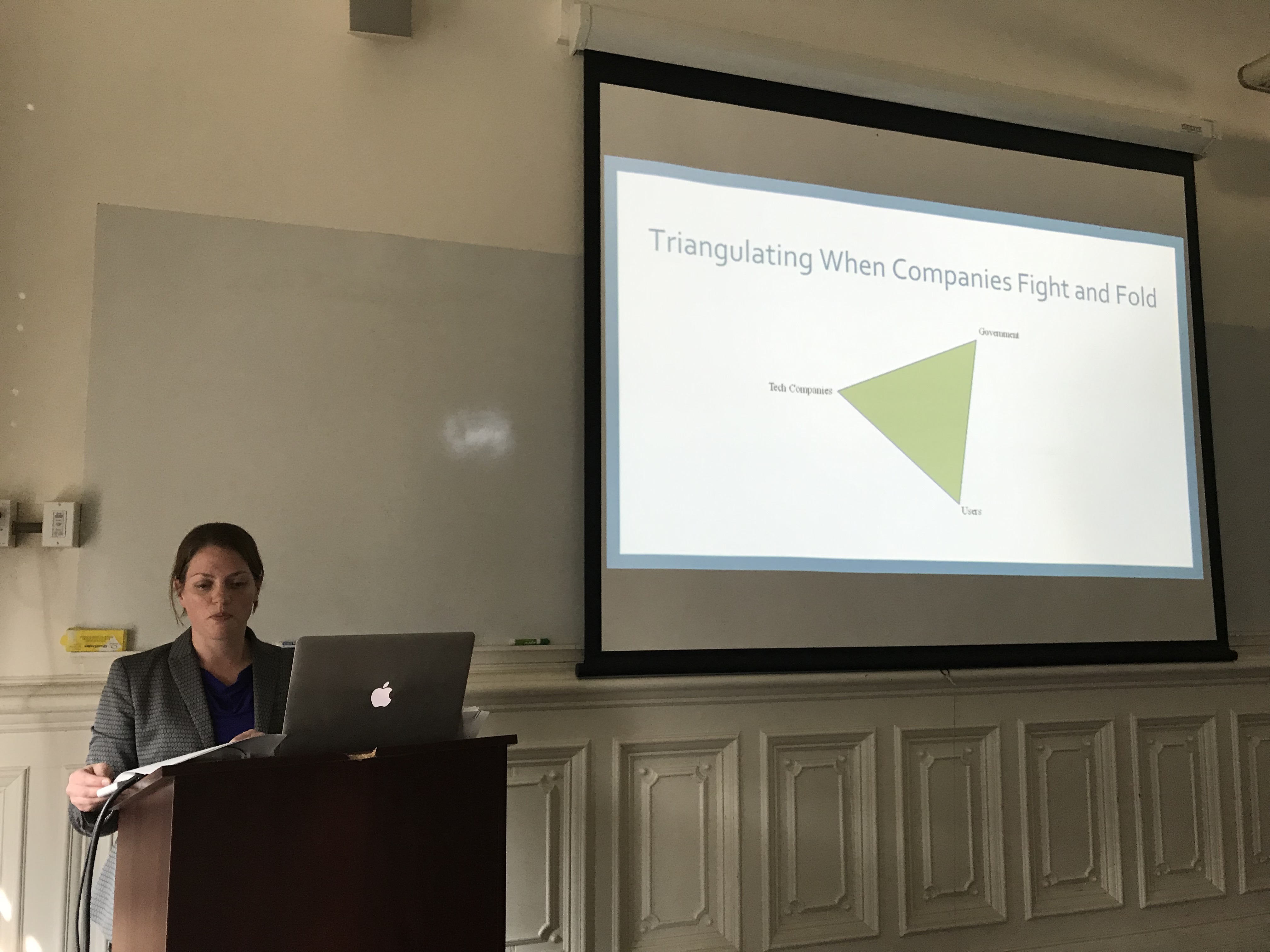 In her talk, Eichensehr explained that two primary characteristics—parity and neutrality—have shaped the emergence of companies as “digital Switzerlands”. Her focus was “not how companies deal with user data, but how they’re dealing with and interacting with and in some cases challenging governments,” she explained. “It is challenging the idea that they are on par with governments, and whether having companies play this role is even a good thing for end users.”

Eichensehr pointed to past examples of when companies have adopted strong stances in relation to governments—for example, when Google pulled out of China in 2010, or when Apple refused to crack iPhones for the FBI. She pointed to the fact that Facebook has nearly 1.5 billion active users per day (more than the population of China), and noted that, while they do not own territory, the largest tech companies often fulfill public functions, such as countering transnational cybercrime or developing public policy proposals. She added that the companies often generate revenues from users around the world, and so tend to take neutral stances on many issues.

Ultimately, Eichensehr said, what matters is a simple question related to the rising power of companies (and the idea that they should remain neutral): “Is this a good thing? Should we want it?” Users, she said, represent the important third part of the triangle between governments and companies. She noted that companies may play an important role as regulators supporting users’ interests (“if you’re battling a government leviathan, it’s better to have another leviathan,” she said.) But she also pointed out that the companies are not elected democratically: while consumers do have “exit rights” (the right to walk away from doing business with a company), it is “difficult to exit all the businesses” given their size and scope.

“These are merchant sovereignties,” she said. “Companies will fold when they think there’s an alignment between users and governments. The position we’ve seen companies come out with is, everybody is our customers, we’re going to treat them equally and help both sides.”

As to whether companies be made to act more like governments in terms of the rights citizens expect, Eichensehr noted that companies have begun to issue transparency reports, and a few have released information about government requests and takedown orders. But she warned that imposing more regulation over companies’ behavior is not ideal: “Putting government in charge of the hen house doesn’t give you a lot of comfort,” she said. “If government regulates, you won’t see the companies being further empowered to challenge the government. The FBI have made clear they’re going to insist on backdoors.”