Steve Weber, Professor in the School of Information and Faculty Director for the Center for Long-Term Cybersecurity, will retire at the end of 2021, after more than thirty years at UC Berkeley.

“The main attraction for me [of the I School] was to be in a place where the center of gravity was the interdisciplinary study of how information technology was reshaping the human experience, from the individual to the social, to the global political economy, where I was focused,” Weber explains.

There were differences between the I School and political science, though. “Being in a truly interdisciplinary program is really hard work,” Weber says. “You have to learn the language of disparate fields, learn to respect alternate methods and epistemologies, and keep a deep humility about the discipline (in my case, political science) that you devoted decades of work to getting right. What always impressed me about my colleagues at the I School, more than anything else, is how hard we all worked at appreciating as best we could each other’s perspectives.”

“Steve is an intellectual giant,” says Hany Farid, Head of School and Associate Dean of the School of Information. “He has a remarkable depth and breadth of thinking across history, political science, economics, and technology that makes him a uniquely powerful voice on some of today’s most critical societal issues. Steve will leave behind enormous shoes that will be impossible to fill, but we are so incredibly grateful that we have been able to call him a colleague, a mentor, and a friend.”

A New Approach to Cybersecurity

In 2015, Weber played a key role in securing a historic $15-million grant from the Hewlett Foundation’s Cyber Initiative to launch the Center for Long Term Cybersecurity (CLTC). At the time, it was among the 30 largest gifts ever received at UC Berkeley.

One of the world’s most expert practitioners of scenario planning, Steve had worked with over a hundred companies and government organizations to develop scenario planning as a discipline for strategic decision-making. His vision for CLTC was an outgrowth of this unique experience, as he understood that cybersecurity is a constantly evolving challenge that requires foresight and long-term thinking. Steve pictured CLTC as a future-focused hub for research and dialogue for private- and public-sector decision-makers, one that would provide critical foresight to industry and NGOs and expand who participates in and benefits from cybersecurity. 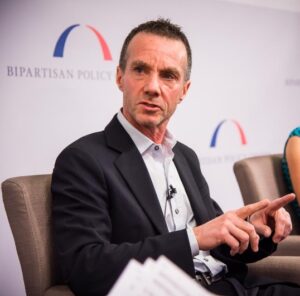 The Center of Long Term Cybersecurity, Weber says, has been the center of his life for the past six years, and the team he has built there is a fully integrated extension of the I School agenda and culture. He credits former Dean Anno Saxenian for giving him “the unique opportunity to essentially start a new career when we launched CLTC.”

“When Steve started CLTC, cybersecurity was still largely seen as a narrow technical field,” says Ann Cleaveland, Executive Director of CLTC. “He thought we should have a place that brought together people who defined cybersecurity more broadly. Steve often says that cybersecurity is everything where humans and machines intersect that is important enough to be called ‘security.’ The rest of the world has now caught up to this view, and CLTC is that place, because of Steve.”

Weber has served as the faculty director of CLTC since its inception in 2015 and has helped build the center’s multi-disciplinary research program, which spans a wide range of emerging cybersecurity issues at the intersection of new technologies and human behavior. Among CLTC’s most noteworthy accomplishments:

These achievements have brought distinction to CLTC as a standout among grantees affiliated with the Hewlett Foundations $130M Cyber Initiative. With Weber’s leadership, CLTC has also attracted new individual, corporate, and foundation philanthropic supporters, advancing efforts to enlarge the field of cyber philanthropy.

Weber was instrumental in establishing the Master of Information and Cybersecurity (MICS), the School of Information’s newest degree program, and he served as the I School’s Associate Dean and Head of School in 2020.

“In just over a decade on the faculty, Steve Weber has made outsized contributions to the I School,” says Anno Saxenian, who served as Dean of the School of Information between 2004-2019. “He brought a fresh voice in areas like international business, open source software, scenario planning, and behavioral economics. Many of us don’t accomplish so much over an entire career! We’ll miss Steve’s intellect, energy, and good humor.”

A Legacy as Teacher and Mentor

Among Steve’s greatest legacies from his career at UC Berkeley are the countless students he mentored and inspired. “To me, Steve’s example is about building things up and bringing a sense of vision to your work,” says Galen Panger, who earned his PhD from the I School under Steve’s tutelage in 2017. “He supported my ideas that were ‘too big,’ and encouraged them to stay big, and taught me how to frame my work so others would be encouraged to view it less narrowly, and to see in it a potential for broader impact.”

“I’m grateful for Steve’s experience and generous curiosity,” says Daniel Griffin, a doctoral student in the I School. “I’ve walked into many meetings with him unsure and unfocused and – after we tossed around, stretched, and up-framed numerous ideas – left with confidence and clear questions. I felt valued from the start and hope to emulate how, in the classroom, he would find something valuable to explore and extend in every student question or stray comment.”

In addition to advising more than fifty doctoral students at Berkeley across his tenure, Weber also helped secure the gift leading to the I School’s first fully endowed, one-million-dollar Ph.D. Fellowship, to make the school competitive in perpetuity for the very best and brightest students examining the intersection of information, technology, and society.

Toward a New Future

Steve and his partner, Gina, are embarking on a big move, as they will leaving the Bay Area for the Hudson River Valley, in New York. Steve insists it is not retirement; instead it’s what he calls “new-life.”

“I think, on reflection, I’ve always been a little bit restless intellectually and professionally,” Weber says. “I’ve been at Berkeley for more than 30 years, but really I had three different careers of about 10 years each. The pandemic brought the future a little closer to the present for me, my partner Gina, and our cats Napoleon and Mrs. Peel, so now became the right moment to make another life move and start over, this time in a different place.”

Although he is retiring from UC Berkeley, Steve will continue to working on issues related to his expertise. “I’ll be working on mostly the same issues and problems that I’ve spent the last decade grappling with, just in a more applied policy- and decision-making environment,” Weber says. “This has always been a focus for me, but now I’ll get to make it my primary focus. And the new world means I can do it remotely, rather than having to be in Washington, DC all the time.”

Meanwhile, the Center for Long Term Cybersecurity will be in the strong and steady hands of Weber’s trusted colleague and collaborator Chris Hoofnagle, Professor of Information and Law at UC Berkeley, who will be assuming the role of faculty director when Weber steps down. “Chris brings enormous energy, a fresh perspective, and deep subject-matter expertise to this role,” Weber says. “I can’t wait to see how he and Ann Cleaveland take CLTC to the next level.”

Steve says he is looking forward to four distinct seasons that include thunderstorms, snow, and his favorite passion, football, as he will live “just a one hour and 39 minute drive from the New Jersey Meadowlands, home to our beloved and much-maligned New York Football Giants.”

The Center for Long-Term Cybersecurity would like to thank Steve Weber for his vision and dedication over the years, and we wish him all the best in this new chapter in his life and career.

This announcement was adapted from an article authored by the UC Berkeley School of Information. The original piece can be found here.

A New Year’s Message from CLTC