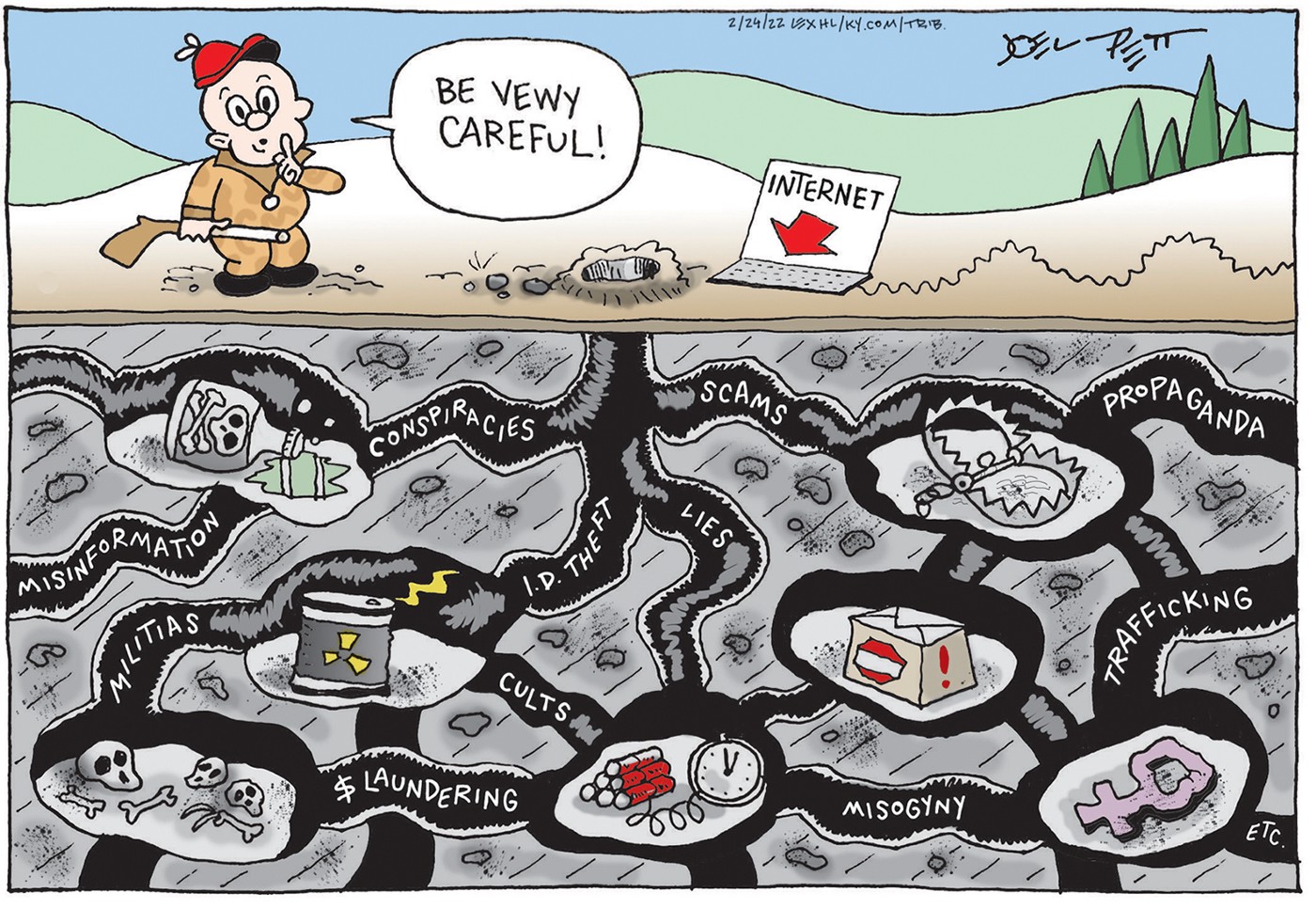 A Cartoonist Faces the Internet: Interview with Joel Pett

A cartoon like Joel Pett’s “Internet Looney Tunes” (2022, above) invites us to rethink our assumptions about the internet. A mashup of old and new, the cartoon juxtaposes 20th-century character Elmer Fudd with 21st-century security threats.

Elmer, known from Looney Tunes as archvillain and enemy of Bugs Bunny, stands a few steps away from a device he never would have encountered in his day — a laptop, which doubles as a sign for the internet. Between the villain and computer is a hole in the ground, leading to a subterranean network of problems delivered by the internet. Elmer looks directly at us and gives a warning in his idiosyncratic style: “Be Vewy Careful.”

What kind of visual commentary on digital security is this? Does the cartoon turn a mirror to its viewers? CLTC was keen to learn more about the creator’s perspective and enrich our efforts to expand appreciation of different representations of digital security through our arts contest, programming, and research.

Joel Pett is a four-time Pulitzer finalist and a 2000 Pulitzer prize winner whose political cartoons have appeared in publications worldwide, including the Washington Post, New York Times, Los Angeles Times, Times of London, USA Today and the Katmandu Times. He is a past president of the Association of American Editorial Cartoonists, a past Pulitzer juror, and has conducted three overseas seminars on editorial cartooning as a guest speaker of the U.S. State Department.

CLTC’s postdoctoral scholar Jordan Famularo caught up with Pett about his use of the cartoon medium to shape conversation about digital security. Jordan develops CLTC research on digital harm by leveraging cultural, communication, and media perspectives. Joel’s work presented an opportunity to add insight to research inquiry about mental models of digital harm, and how visual media relate to security discourse.

Note: Questions and responses have been abridged and edited for clarity.

Help us set the scene for understanding your creative process. What is the setting like where you produce your cartoons?

Up until a year ago, I had a studio and a 200-year-old mill out in the country in rural Kentucky, which was fantastic. I had it for 30 years, but I didn’t want to grow old and die out there, so I bought a ranch house in suburban Lexington. I’m basically in a spare bedroom now. The walls are covered with all the memorabilia of my career, which I guess is what people do. And there’s a big old-fashioned wooden drawing board — the kind they had 50 of in a row lined up at the old newspaper building. And a couple of filing cabinets and a lot of books and papers everywhere on the floor and notebooks full of mostly bad ideas. And a couple of very special treasures from other cartoonists. And a bunch of framed college degrees that, if you were to walk in here, would think must be mine, but in fact they’re my father’s, because I walked away from college 45 years ago.

How long have you been making cartoons?

I had an early love affair with cartoon line drawing. I remember playing Monopoly with my siblings, but I would insist that I got to take all the Chance and Community Chest cards, turn them over, and then redraw the little rich guy. I made them play with my pictures face-up. I liked copying stuff like that. And then I fell in love with political cartoons. We always had newspapers around the house, as people did back then. When I was a late teenager and realized I could be drafted into the Vietnam War, I started to pay attention to politics. And the cartoons of the famous Herblock [Herbert Block], who was at the Washington Post for like 50 years, really grabbed me. At the time, I wanted to be a professional golfer, but I was not good enough to be an amateur golfer. So cartooning looked like something that could use my skill set of sarcasm and humor and bitterness and anger and frustration and mockery — all those attributes that people like so much in a person.

How do you begin when you make a cartoon?

Up until the mid 1990s, everything was a pen-and-ink drawing, dipping an old-style crow quill pen into an ink well, then painstakingly going over a pencil drawing, then waiting for it to dry, then erasing it, and then touching it up if need be. And then somebody at the paper would take a photograph of it. If you made a mistake, you had to start over. Now there’s Photoshop, so it’s very different. The hard part is coming up with the idea. The drawing is nothing. It takes an hour to pencil it, ink it, erase it, put it on the scanner, and Photoshop it. But sometimes the gestation period of the idea takes years. You know, people say, “Oh, how long does it take to do that?” It takes some time between one hour and 68 years.

In 2022, you made a cartoon that highlights the internet’s role in shaping society. We see a laptop sitting on bare ground that doubles as a signpost. It reads, “Internet,” and shows a downward pointing arrow that directs our attention to a hole in the ground that leads to a subterranean system of tunnels. Lurking in the tunnels are diverse threats and harms. How did the idea for this cartoon come to you?

It’s so obvious and easy. It’s because people use the term “rabbit hole” to describe going online, looking for one thing, and ending up doing something completely different. For those of us who didn’t grow up on farms or in the country, the first time you ever heard of a rabbit hole was on Bugs Bunny. I worried at the time whether the reference was too old, which is always a consideration with a cultural reference. Is it something where all the young people are going to groan and “OK, Boomer”? But I did it anyway.

How did you approach populating the underground tunnels with words and visuals?

When I started, it was just the words. I was just going to have a warren [an interconnecting network of rabbit burrows]. After I made my list of the stuff that can rain down on you from the internet, then I was just going to label each room, and there would be no visual element to it at all, which is not ideal. Then I added generic horrible stuff, like poison, dynamite, and a bear trap. It’s from the era of this kind of cartoon.

Usually there are somewhere between 4 and 20 rough sketches, which are really quick. Once I knew what the picture was going to look like, all I had to do in this case was make sure I didn’t forget something. I didn’t want people to look at it and go, well, he left out cybersecurity. It’s there by implication, but I didn’t use that word in it.

By the way, there’s a whole group of cartoonists — especially younger cartoonists — who think that labeling anything is really hackneyed and old style, and who just roll their eyes and groan. But I really like heavily labeled things for complex issues.

If you were to categorize all the labels in your drawing, what would you call them? Are they threats? Harms?

Would harms also describe those things?

I’m curious how the harms are represented in your cartoon. It’s not someone doing the harms. They’re just kind of there.

And do you think that reflects how society thinks about harms from the internet — or the mental model that we have — which is that these harms arise from a system?

Yeah, I get it. They just come out of nowhere through cyberspace, instead of being foisted upon you by the schoolyard bully or whatever harm there was before there was electricity. It’s interesting. It’s hard to put a face on it. Sometimes in cartooning, we like to steal somebody else’s villain and draw that. You can take a Godzilla or something, put a labeled t-shirt on it, and it changes the identity from Godzilla to something else. Then you show that destroying something.

I take your point about the dehumanization of it, how it just seems like nobody’s responsible for this. But of course, people are responsible for it. All of the people who cheat people out of their money and the pornographers and everybody else who’s making bank off this, they are real people, and they deserve to be held accountable. It’s hard to do it as a cartoonist, I’ll say that, but maybe I haven’t tried hard enough. I’ll think about that.

I’ve noticed when I try to write about digital harm, and when others write about it, the agent or “doer” of the harm is often left out of the sentence. I want to drill down a bit into the fact that the Elmer Fudd character is solo in this cartoon. Did you consider adding any representations of companies, governments, or people?

Not in this one. Maybe for simplicity, or because I didn’t think of it. A cartoon about a specific company is a very targeted attack. And I like those. This is something completely different. It’s generic.

I wonder if it has something to do with the way that we as a society talk about the internet as not having one entity that’s responsible for how it impacts our society, or one entity that built it or made it.

You’re right. Occasionally, you get Mark Zuckerberg or somebody called out for their little piece of it, or TikTok is called out for making girls feel bad about their bodies. But in general, it’s just the worldwide internet, which is such a curse, but also a blessing in some ways.

I think Bugs Bunny’s presence is implied by the hole in the ground.

I’ve wrestled for a while trying to figure out what to do with the rabbit, Bugs, and then I just thought, “Leave him out.”

Elmer Fudd is offering a direct warning to the viewer. How do you want viewers to feel about their level of control over their interaction with the internet?

Obviously, I wish that every kid was fortunate enough to have parents who could teach them the skills that they will need, but I’m not sure that the parents even have that, because things are changing so fast. Maybe this group of kids will surprise me, but I don’t know. I’m kind of concerned about it.

I love this cartoon, and you know what, you can tell it by the drawing. I can tell that I was having fun. I didn’t care if it was smooth. I was just having fun. I was doing it. I can’t explain it any other way. I loved designing the logo for the bar — like a little art project within the art project.

It seems like this cartoon is bringing the consequences of tech addiction into focus for us.

Right, with a heavy emphasis on the misogyny and violent, anti-social, and culturally destructive aspects. I also like the hashtag.

Me too. I’m wondering if you’d be open to interpretations that see this cartoon as participating in a conversation about digital security, if we define digital security broadly?

I’ve enjoyed talking about your work and learning about your process and how you approach cartoons. Is there anything else you’d like to mention?

I apologize to you if I’m so negative. But there’s an old saying that a cynic is just a heartbroken optimist. If you don’t care, then there’s not even a reason to be cynical.